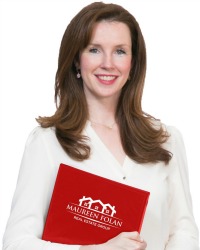 Maureen has been in the real estate business since she was old enough to lick and seal an envelope. As a young girl, Maureen would accompany her mother, Ann Folan- one of Queen’s most trusted real estate professionals- on appointments and open houses. From a young age, Maureen quickly learned a great deal about the real estate industry. To better understand the business world, Maureen earned her Marketing/Communications degree from St. John’s University. After graduating in 2001, it was only a natural progression to integrate into the real estate industry and continue the family tradition.

Maureen became a full time in realtor in 2005 starting off with Remax Universal Real Estate. Within 3 years, Maureen and her team were awarded the # 1 Sales Team in all of New York State. In 2008, Maureen, her mother, Ann, and 2 sisters branched out and opened The Maureen Folan Real Estate Group. Within 2 years, the boutique style brokerage became the # 1 real estate firm in Northeast Queens. Since it’s inception, Maureen has consistently been the firm’s top sales leader. Her remarkable achievements were recently acknowledged when she was invited to attend “Top 20 Under 40 Realtors”. One of the highest honors for any New York Realtor.